According to Greg Auman, the Buccaneers and WR Mike Evans have agreed to restructure his contract. 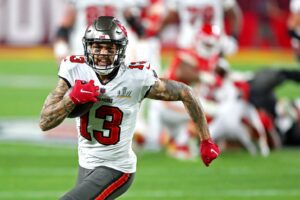 The deal will be signed Thursday and add $8.94 million in cap space to Tampa Bay’s books for 2021. Auman adds the Buccaneers are expected to add two void years to the end of Evans’ deal to create maximum space.