Stephen Holder of the Tampa Bay Times expects to see Buccaneers defensive end Michael Bennett test the free agent market after talks regarding an extension failed to generate any momentum.

Bennett, 27, produced a career high nine sacks this past season despite having played in both the defensive end and defensive tackle position. Having spent the last four seasons in Tampa Bay, Bennett has shown improvement year after year and now holds some leverage in negotiations, although it is still unknown what type of contract he is seeking.

“I love the Buccaneers, but it’s a business,” said Bennett “You’ve got to do what’s best for your family.”

Buccaneers GM Mark Dominik has said that their top priority this offseason is to retain their free agents, so there’s a decent chance talks could pick up at a later time.

We have Bennett listed as the No. 14 best available free agent in our Top 50 Free Agents list. 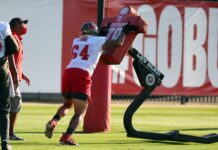