Ian Rapoport is reporting that Buccaneers C Ryan Jensen, who was carted off during Thursday’s practice, is feared to have suffered a serious knee injury. 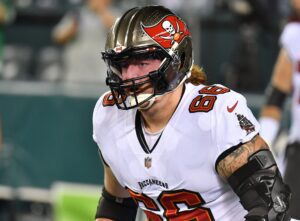 A source tells Adam Schefter that it’s “not looking good” for Jensen. The plan is for Jensen to undergo further tests in the coming days.

All indications have been that this could be a tough injury for Jensen.

Bucs GM Jason Licht said they drafted Robert Hainsey in the third round last year to set up good depth at center and added that they have confidence in him and Nick Leverett if Jensen is sidelined.

Jensen, 31, is a former sixth-round pick by the Ravens in the 2013 NFL Draft. The Ravens decided to waive him after one year with the team and later re-signed him to their practice squad.

Baltimore later promoted him to their active roster then re-signed with the team on a one-year exclusive rights contract in 2016. Jensen returned to Baltimore on a one-year, restricted deal before agreeing to a four-year, $42 million contract with $22 million guaranteed with the Buccaneers in 2018.

The Buccaneers re-signed Jense to a three-year, $39 million contract this past March.

In 2021, Jensen appeared in all 17 games for the Buccaneers, making 17 starts for them at center.