According to Ian Rapoport, Buccaneers LB Lavonte David picked up a low-ankle sprain in Sunday’s win against the Dolphins. 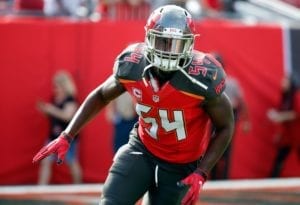 The injury will keep him out of Thursday night’s game against the Eagles, as Tampa Bay has a short turnaround to play again, and Rapoport says David will be considered week-to-week after that.

It’s another big hit to the Buccaneers’ defense, as David is one of their best defensive players.

In 2021, David has appeared in five games for the Buccaneers and recorded 34 total tackles, one sack and two pass defenses. Pro Football Focus has him rated as the No. 23 linebacker out of 82 qualifying players.