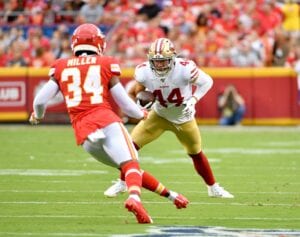 Miller will revert back to the practice squad on Monday without having to clear waivers.

Miller, 23, wound up going undrafted out of Florida Atlantic back in 2019. He later signed on with the Chiefs, but was waived coming out of the preseason.

Miller signed on to the Buccaneers’ practice squad and has been on and off of the unit ever since.

In 2020, Miller has appeared in two games for the Buccaneers and recorded one tackle.