According to the Athletic’s Greg Auman, the Buccaneers have re-signed OT Josh Wells. 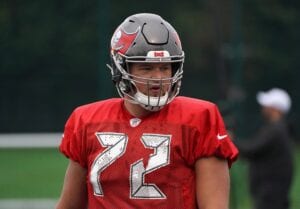 Auman adds it’s a one-year deal for Wells to come back for the veteran minimum of $990,000 with an additional $137,500 signing bonus. Tampa Bay guaranteed Wells a total of half a million.

Wells, 30, wound up going undrafted out of James Madison back in 2014. He later signed a three-year, $1.53 million contract with the Jaguars and re-signed with Jacksonville through the 2018 season after they exercised his option.

The Jaguars brought Wells back on a new deal in 2018. However, he was released coming out of the preseason. He signed on with the Buccaneers shortly after and re-signed on a one-year deal for 2020.

In 2019, Wells appeared in 15 games for the Buccaneers and made one start as a backup offensive tackle.