Tom Pelissero of NFL Media reports that the Buccaneers are signing former Bengals RB Giovani Bernard to a one-year contract on Monday. 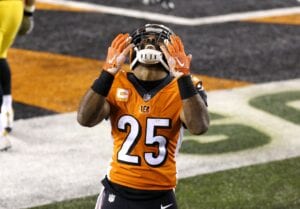 Bernard reportedly asked for his release after Cincinnati approached him about a pay cut two weeks into free agency.

It’s worth mentioning that signing Bernard to a contract won’t impact the Bucs’ 2022 compensatory picks, given that he was released this offseason.

Bernard, 29, is a former second-round pick of the Bengals back in 2013. He played out his rookie contract before agreeing to a four-year, $16.6 million contract that included $5 million guaranteed with the Bengals in 2016.

Bernard was set to be an unrestricted free agent last offseason but Cincinnati re-signed him to a two-year, $10.3 million extension. He was set to earn a base salary of $3,700,000 in 2021 when the Bengals released him a few weeks ago.