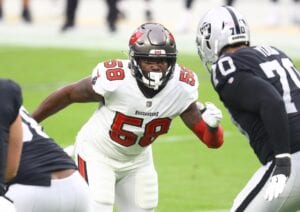 Barrett, 29, signed with the Broncos as an undrafted free agent out of Colorado State in 2014. He was waived coming out of the preseason and re-signed to Denver’s practice squad.

After bouncing back and forth between the practice squad and active roster, Barrett landed on the active roster at the end of his rookie year. Barrett signed with the Buccaneers as an unrestricted free agent in 2019 to a one-year, $4 million deal and was franchised in 2020.

Tampa Bay re-signed Barrett to a four-year, $72 million extension in 2021 that included $34.75 million guaranteed. He’s set to make base salaries of $16 million and $14.25 million the next two seasons.

In 2021, Barrett has appeared in 15 games for the Buccaneers and recorded 51 tackles, 10 sacks, three forced fumbles, two recoveries, one interception and four pass deflections.

The 49ers signed him to a three-year, $39.15 million contract and he was testing the open market as an unrestricted free agent this year before signing a one-year, $2.25 million deal with the Buccaneers.

In 2021, Sherman appeared in five games for the Buccaneers and recorded 11 tackles, one interception and one fumble recovery.