According to Tom Pelissero, Buccaneers WR Chris Godwin has a hamstring strain and likely will miss some time. 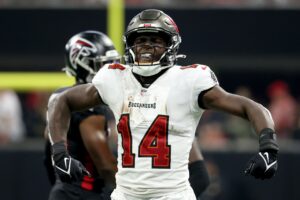 There’s no word yet on how long Godwin will be out or if Tampa Bay will place him on injured reserve, which would sideline him for four weeks minimum. Pelissero does say the team is optimistic it’s not a major injury.

He was seen limping to the sideline after attempting to reel in a pass from QB Tom Brady. He’s also coming back from a torn ACL suffered late last season.

Tampa Bay gave Godwin a three-year, $60 million deal with $40 million guaranteed this past offseason. He was scheduled to become a free-agent.

In 2021, Godwin appeared in 13 games for the Bucs. He recorded 92 receptions for 1,054 yards and five touchdowns. Godwin also picked up 21 yards rushing on four carries and a touchdown.

We’ll have more on Godwin as the news is available.