According to Tom Pelissero, the Cardinals are bringing in Cowboys DC Dan Quinn for a second interview this week. 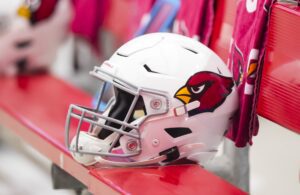 Arizona was able to interview Quinn virtually on Saturday before Dallas’ playoff game on Sunday. Now that the Cowboys have been eliminated, there are no restrictions on Quinn in terms of interviewing and taking any open head coaching jobs.

Quinn is also reportedly one of the top choices remaining for the Broncos. So there’s a potential cat-and-mouse game being played between Denver and Arizona for Quinn’s services.

The Cowboys hired Quinn as their defensive coordinator last January and Dallas’ defense immediately became one of the NFL’s best.

As the Falcons’ head coach, Quinn led the team to a record of 43-42 (50.5 percent) over the course of six seasons, which includes two playoff appearances.

We’ll have more on the Cardinals’ coaching search as the news is available.

Cardinals QB Kyler Murray Might Not Be Ready Until Midseason