Ian Rapoport reports that veteran Cardinals C Rodney Hudson has informed the team that he plans to return and play this season. 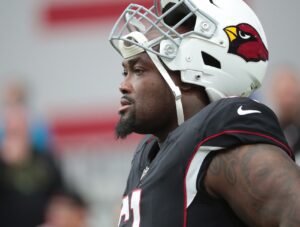 Rapoport adds that Hudson will report with other veterans for camp next Tuesday.

His absence this offseason so far has been unexcused, with HC Kliff Kingsbury saying that the team is working through some things with Hudson and that he could not go into further detail on the situation.

Hudson was set to make a base salary of $8.25 million for the 2019 season before signing a three-year extension with the Raiders worth $33.75 million with $24.4 million guaranteed.

However, the Raiders traded him to the Cardinals prior to the 2021 season.

In 2021, Hudson appeared in and started 12 games for the Cardinals as their center.

Pro Football Focus rated Hudson as the No. 31 center out of 39 qualifying players.

We will have more news on Hudson as it becomes available.