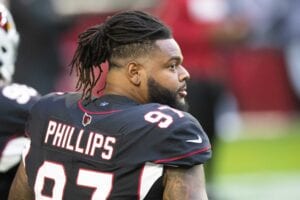 Phillips, 28, is a former second-round pick of the Dolphins back in 2015. He was in the final year of his contract when the Dolphins waived him in 2018 and he was later claimed off waivers by the Bills.

In 2020, Phillips appeared in nine games for the Cardinals, recording 11 total tackles, two sacks, two forced fumbles, one recovery and one pass defense.

In 2020, Pugh appeared in 15 games for the Cardinals and made 15 starts at left guard. Pro Football Focus had him rated as the No. 38 guard out of 80 qualifying players.