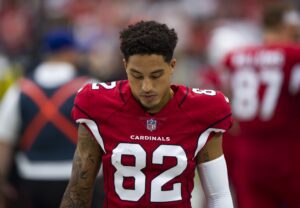 Baccellia, 25, wound up going undrafted out of Washington back in 2020. He later signed a rookie contract with the Chiefs before being cut loose during the preseason.

From there, Baccellia had a brief stint with the Patriots before joining the Cardinals last year. Arizona brought him back on a futures contract and he has been on and off of their roster ever since.

In 2022, Baccellia has appeared in two games for the Cardinals and caught two passes for 12 yards receiving and no touchdowns.