The Arizona Cardinals announced Wednesday that they’ve re-signed DL Michael Dogbe to their practice squad after he officially passed through waivers unclaimed. 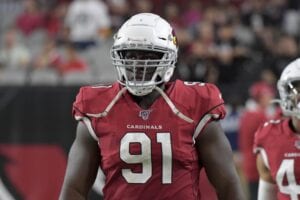 Dogbe, 24, is a former seventh-round pick of the Cardinals back in 2019. He signed a four-year, $2.6 million contract with Arizona and managed to make the 53-man roster last year.

However, the Cardinals waived Dogbe on Monday to make room for DL Angelo Blackson.

In 2019, Dogbe appeared in eight games for the Cardinals and recorded five tackles and no sacks.