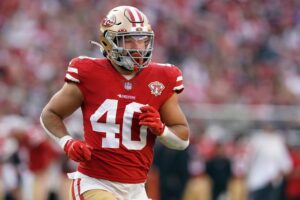 Hokit, 24, wound up going undrafted out of Fresno State back in 2020. He later signed a rookie contract with the 49ers.

San Francisco waived Hokit coming out of the preseason and he has been on and off of their roster ever since. The 49ers brought him back on a futures contract this past January only to waive him earlier in the week.

During his college career at Fresno State, Hokit played linebacker and running back, totaling 1,260 rush yards on 303 carries to go along with 38 receptions for 260 yards and 18 touchdowns over the course of four seasons and 44 games.