According to Ian Rapoport, the Chargers have not completely closed the door on LT Rashawn Slater returning to play later in the season. 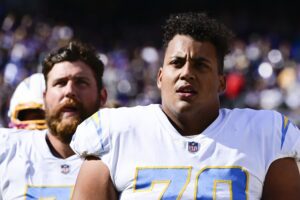 Rapoport says Slater will have surgery for a torn biceps tendon early this week, which typically carries a three to four-month recovery timeline.

That could potentially leave room for Slater to return to play sometime in January if rehab goes well. Los Angeles has regular season games on January 1 and January 8 against the Rams and Broncos.

The hope would also be to have Slater in the playoffs if the Chargers can overcome their 1-2 start. Teams can bring back eight players from injured reserve and Rapoport says the Chargers will save one of those spots for Slater.

Slater, 23, was a three-year starter at Northwestern. He opted out of the 2020 season due to the pandemic. The Chargers drafted Slater with pick No. 13 overall in the 2021 NFL Draft.

In 2022, Slater appeared in three games for the Chargers at left tackle. Pro Football Focus had him rated as the No. 3 tackle out of 70 qualifying players.