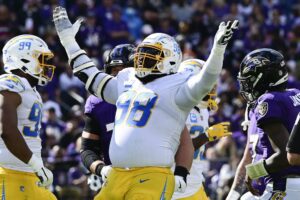 Joseph, 33, is a former second-round pick of the Giants back in 2010. He spent four seasons in New York before departing in 2014 for a five-year, $31.5 million contract with the Vikings.

Joseph had two years remaining on his deal when he agreed to a four-year, $50 million extension that included $31.5 million guaranteed when the Vikings released him last year. He later signed a two-year, $17 million deal with the Chargers.

In 2021, Joseph has appeared in nine games for the Chargers and recorded 43 tackles and a sack.