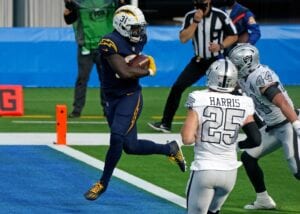 Miami had initially planned to release Ballage but the Jets swooped in with an offer before he could be placed on waivers. New York agreed to send a conditional 2021 seventh-round pick to Miami in exchange for Ballage. However, the deal fell through after he failed a physical.

The Jets later signed Ballage to their roster before waiving him a few weeks later. He then signed on to the Chargers’ practice squad.

In 2020, Ballage has appeared in four games for the Jets and Chargers and rushed for 82 yards on 18 carries (4.6 YPC) to go along with 11 receptions for 82 yards receiving and one touchdown.