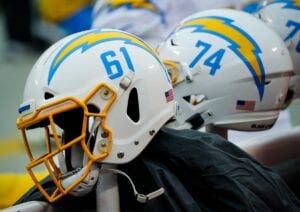 The release of Edwards means P Ty Long is expected to be the Chargers punter this season.

It’s worth mentioning that NFL teams have until Tuesday to cut their rosters down to 85 players.

Edwards, 29, was a seventh-round draft pick by the Jets in 2016, and he spent four seasons as the Jets punter.

After a brief stint with the Bills last August, Edwards signed on to the Chargers practice squad in December, and then signed a futures contract with the team in January.