According to Howard Balzer, the Los Angeles Chargers brought in four free agents for workouts in recent days including:

Carew, 23, originally signed on with the Seahawks as an undrafted free agent out of Oregon back in May. He was waived after a couple of months and signed with the Bears as a free agent.

He was among Chicago’s final roster cuts coming out of the preseason.

Since becoming a free agent, Carew worked out for the 49ers but was not signed to a contract following the session. 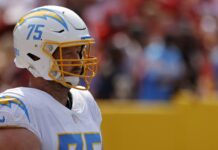