Per Mike Klis, the DUI charges against Broncos RB Melvin Gordon have been dismissed. 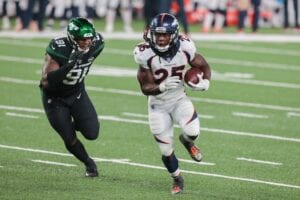 Gordon did plead guilty to reckless driving for excessive speeding according to Klis, which is a major reduction from the initial charges.

Klis says Gordon’s blood test results were suppressed as evidence due to issues with how Gordon was stopped by the police.

It remains to be seen whether Gordon will face any additional discipline from the NFL. Similar offenses have resulted in two or three-game suspensions for other players in the past, including Gordon’s teammate, Broncos S Kareem Jackson.

In 2020, Gordon appeared in 15 games for the Broncos and rushed for 986 yards on 215 carries (4.6 YPC) and nine touchdowns to go along with 32 receptions for 158 yards receiving and one additional touchdown.