According to Aaron Wilson, the Chiefs are placing OL Lucas Niang on the injured reserve on Friday. 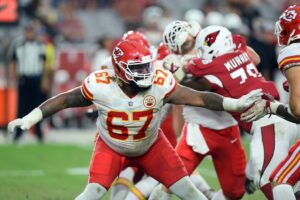 Niang, 23, is a former third-round pick by the Chiefs in the 2020 NFL Draft out of TCU, but opted out of his rookie season due to the global pandemic.

In 2021, Niang appeared in 12 games and made nine starts at tackle.