The Kansas City Chiefs are promoting RB DeAndre Washington to their active roster on Thursday, according to Field Yates. 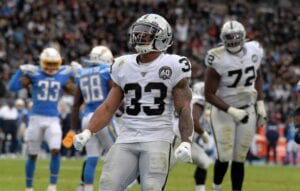 Washington, 27, is a former fifth-round pick by the Raiders in the 2016 NFL Draft out of Texas Tech. He finished his four-year rookie contract and later agreed to a contract with the Chiefs back in April.

Kansas City waived Washington coming out of training camp and later re-signed him to their practice squad.