According to Adam Caplan, the Chiefs are expected to promote QB Shane Buechele from the practice squad to the active roster. 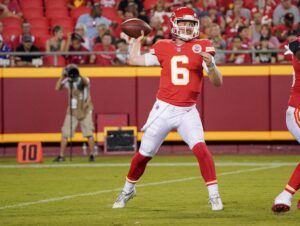 He would be the third quarterback on Kansas City’s roster as things stand right now.

Buechele, 23, was a two-year starter at SMU after spending three years at Texas. He signed with the Chiefs as an undrafted free agent following the 2021 NFL Draft.

Kansas City waived him coming out of the preseason and re-signed him to the practice squad.

In five seasons for SMU and Texas, Buechele had a 63.1 completion percentage with 11,660 passing yards, 87 touchdowns and 32 interceptions. He also had 478 rushing yards with eight touchdowns in 56 games.