The Kansas City Chiefs officially signed nine players to futures contracts for the 2019 season including:

Litton, 23, wound up going undrafted out of Marshall back in 2018. He later agreed to a three-year, $1.71 million contract with the Chiefs, but was unfortunately waived coming out of the preseason.

The Chiefs later signed Litton to their practice squad after he cleared waivers.

During his college career at Marshall, Litton threw for 8,335 yards while completing 60.8 percent of his passes to go along with 72 touchdowns and 31 interceptions over the course of three seasons and 34 games. 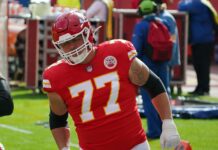