The Kansas City Chiefs are signing K Matt Ammendola to their practice squad following a tryout, according to Tom Pelissero. 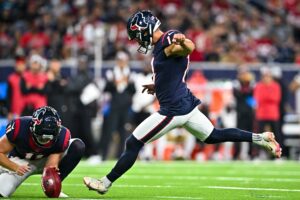 Ammendola, 26, wound up going undrafted out of Oklahoma State back in 2020. He was later signed by the Panthers and was set to compete with K Joey Slye for the starting job in 2021 before being let go and signing with the Jets.

The Jets waived Ammendola and re-signed him to the practice squad later in the season. He was brought back on a futures deal for 2022 but was released back in March.

From there, the Texans signed Ammendola to a one-year deal in August, but released him just a few days later.