Tom Pelissero reports that the Chiefs are signing RB Melvin Gordon to their practice squad following his release from the Broncos. 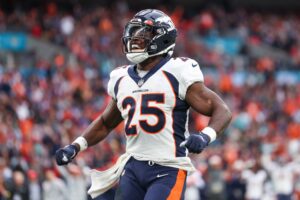 Gordon’s release from the Broncos earlier this month was due in large part to him fumbling five times in 10 games this season.

Gordon returned to Denver on a one-year deal for the 2022 season. However, the Broncos opted to waive him on Tuesday.

We will have more news on Gordon as it becomes available.