Jeremy Fowler of ESPN reports that the Chiefs plan to tender an offer to restricted free agent guard Andrew Wylie. 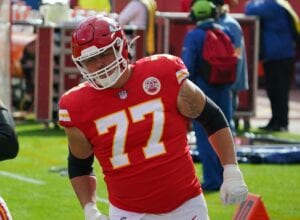 A second-round tender would cost Kansas City $3.384 million for the 2021 season while an original-round tender comes in at $2.183 million.

Andrew Wylie, 26, wound up going undrafted out of Eastern Michigan back in 2017. He later signed a three-year deal with the Colts and was on and off of their practice squad.

Wylie later had brief stints with the Browns and Chargers before the Chiefs signed him to their practice squad. He returned to Kansas City last year on an exclusive rights deal.