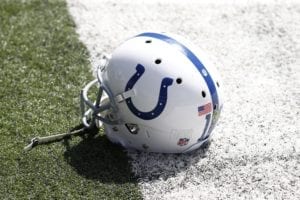 Blankenship, 25, signs with the Colts as an undrafted free agent out of Georgia in 2020 after receiving some buzz as a potential draft pick even as a specialist.

Blankenship won the Lou Groza award in 2019 given to college football’s best kicker. He also was a Georgia fan favorite because of the unorthodox glasses.

In 2022, Blankenship has made two out of three field goal attempts and both extra points.