Former WR coach Kevin Patullo is expected to stay on staff in Indianapolis with a new title.

Alex Marvez is reporting that the Colts are hiring former Eagles OC Mike Groh in an undisclosed coaching role.

Marvez says Groh’s role is still to be determined.

There are obvious ties here, given that Groh worked with Colts HC Frank Reich while they were together with the Eagles.

Groh, 48, began his coaching career with the Jets as an assistant back in 2000. He spent a number of years at Virginia before holding positions at Alabama and Louisville.

Philadelphia elected to part ways with Groh and WR coach Carson Walch after both coaches drew criticism due to their units struggling through 2019. 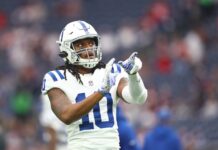 183,470FansLike
7,623FollowersFollow
270,821FollowersFollow
© NFLTradeRumors.co is an independent news source and has no affiliation with the National Football League (NFL), NFL.com, or any team(s).
wpDiscuz