Ballard was coming off of an ACL tear that forced him to miss nearly the entire 2014 season, so this is really terrible news for the young running back.

Indianapolis will almost certainly enter the regular season with Trent Richardson and veteran Ahmad Bradshaw as their top-two running backs, barring another injury.

Beyond that, the Colts have Chris Rainey and Daniel Herron currently on their roster and they should get an opportunity to compete for the job in training camp.

However, should the Colts decide to look to the free agent market for some addition depth, Mike Wells of ESPN.com specifically mentions that they could consider guys like Ronnie Brown, Felix Jones, and Willis McGahee.

Wells admits that the team could always wait until later in training camp to see who ends up being released.

Here’s our list of Available NFL Free Agents for the time being. 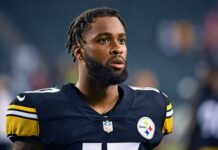