According to Mike Wells, Colts OT Sam Tevi is out with a torn ACL. 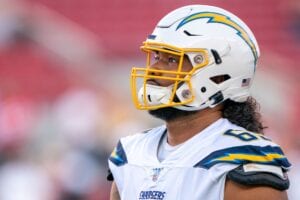 Tevi was signed this offseason to provide insurance to start the season at left tackle for Indianapolis. But he had fallen behind other options and now it looks like he’ll end up missing the 2021 season.

Expect the Colts to place Tevi on injured reserve in the next few days.

Tevi, 26, is a former sixth-round pick of the Chargers back in 2017. He played out the final year of his four-year, $2.56 million contract with Los Angeles.

Tevi was testing the open market as an unrestricted free agent for the firs time in his NFL career.