There has been some recent speculation about Andrew Luck possibly coming out of retirement and returning to the Colts. None of the buzz has been based on substantial reporting and Colts owner Jim Irsay made it clear that it’s highly unlikely Luck will return to the NFL after surprising walking away from the game a few years ago. 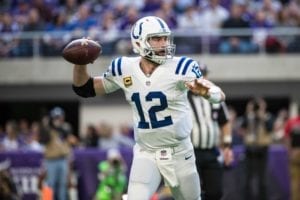 “I’ll tell you this, Chris, and to all Colt fans,” Irsay told Chris Widlic of CBS 4. “I think everyone just needs to digest this fact that he’s more retired now than he was a year and a half ago. I mean, he is retired.

“Only Andrew knows, of course, because it’s his decision, but I can only say that he definitely is retired, and there’s really no wiggle room or rumor or anything as much as people would like to hear that. Believe me, I wish it was true, and I was hiding some announcement that we could release two days from now, but that’s not the case.”

It remains to be seen how the Colts will upgrade at quarterback this offseason. They were among the teams in the mix to trade for Matthew Stafford, but he was later sent to the Rams.

Some other potential trade options include Carson Wentz and Sam Darnold.

Luck, 31, was a former first-round pick of the Colts back in 2012 out of Stanford. He finished the third year of his six-year, $139.125 million contract that included $87 million guaranteed and was set to make base salaries of $9.125 million, $11 million and $11 million over the final three years of his deal at the time he retired.

For his career, Luck threw for 23,671 yards while completing 60.8 percent of his passes to go along with 171 touchdowns and 83 interceptions over the course of six seasons and 86 games.

Luck was the 2018 Comeback Player of the Year and a four-time Pro Bowl selection.