According to Ian Rapoport, the Colts are re-signing WR Dezmon Patmon to their practice squad on Wednesday. 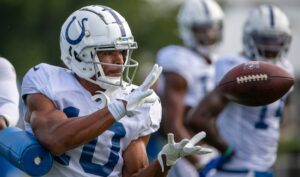 Patmon, 24, is a former sixth-round pick of the Colts back in 2020. He’s currently in the third year of his four-year, $3.4 million rookie contract but was cut loose earlier this week.

In 2022, Patmon has appeared in one game and recorded two receptions for 24 yards and no touchdowns.