Armando Salguero reports that the Colts are signing WR Isaiah Ford to a contract. 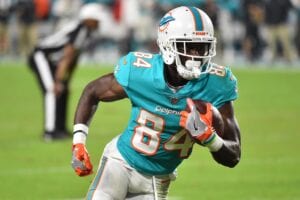 In a corresponding move, the team is waiving DT Caeveon Patton.

Ford, 26, is a former seventh-round pick of the Dolphins back in 2017. He agreed to a four-year, $2.5 million contract with Miami, but spent his rookie season on the team’s injured reserve list.

Since then, Ford was on and off of the Dolphins’ active roster before being traded to the Patriots for a conditional 2022 seventh-round pick. New England waived him during the season in 2020 and he re-signed to the Dolphins’ practice squad before being called up.

Maimi declined to tender him a contract as a restricted free agent last offseason but later re-signed him in July. He was cut during the season.