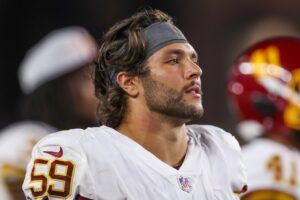 Kunaszyk, 25, wound up going undrafted out of California back in 2019. He later signed a three-year, $1.755 million contract with the Panthers and managed to make the 53-man roster coming out of the preseason.

Unfortunately, Carolina opted to waive Kunaszyk coming out of training camp and he then caught on with Washington’s practice squad before being elevated to their active roster in 2020. He was once again on and off the active roster in Washington during 2021.

In 2021, Kunaszyk appeared in 11 games for Washington and recorded four tackles.