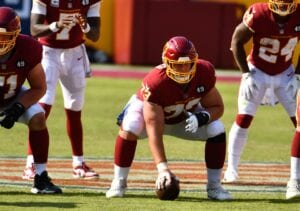 He’ll miss a minimum of four games before he’s eligible to return to play.

Roullier, 28, is a former sixth-round pick of Washington back in 2017. He was in the final year of his four-year rookie contract and in line to be an unrestricted free agent when he signed a four-year deal worth $40.5 million with $19 million fully guaranteed with Washington in 2021.

He’s due to make base salaries of $7.2 million and $8.3 million over the next two seasons.

In 2022, Roullier has appeared in two games for Washington, making two starts for them at center. Pro Football Focus had him rated as the No. 29 center out of 36 qualifying players.