According to Adam Schefter, Commanders WR Terry McLaurin does not plan to attend mandatory minicamp this week. 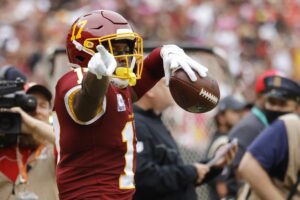 He and the team are negotiating a new contract extension as McLaurin enters the final year of his rookie deal. Things are apparently far enough apart between the two sides that McLaurin feels it necessary to send a message by skipping minicamp.

Washington could fine McLaurin in the range of $90,000 for missing all three days of minicamp. However, they can also forgive those fines as part of negotiations later on.

The wide receiver market has exploded this offseason and it’s likely McLaurin is looking at a deal well north of $20 million a year, perhaps closer to $25 million annually.