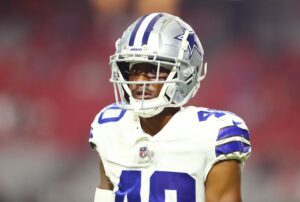 You can expect the Cowboys to place him on the COVID-19 list in the coming days.

Wright, 23, was drafted by the Cowboys in the third round of the 2021 draft. He was a two-year starter at Oregon State and an honorable mention All-Pac 12 in 2020.

In 2021, Wright has appeared in 10 games for Dallas, totaling two tackles and one forced fumble.