Cowboys CB Rashard Robinson has been suspended for the first two games of the 2021 season for violating the league’s policy on performance-enhancing substances, per Michael Gehlken. 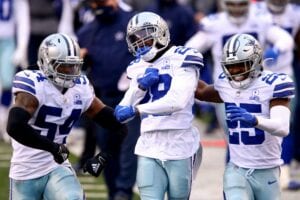 Robinson is eligible to participate in training camp and the preseason this summer.

Robinson previously served a 10-game suspension for an undisclosed violation.

Robinson, 25, is a former fourth-round pick of the 49ers back in 2016. San Francisco traded him to the Jets in 2017 in exchange for a fifth-round pick.

Robinson was entering the final year of his four-year, $2.72 million contract and stood to make a base salary of $2,025,000 for the 2019 season when the Jets waived him in 2019.  From there, he signed on to the Cowboys’ practice squad last year.

In 2020, Robinson appeared in four games for the Cowboys and recorded 20 tackles and no interceptions.