ESPN’s Tim MacMahon writes that he believes Tashard Choice is at risk of losing his job to Lonyae Miller.

Choice recently suffered a calf injury which is likely to keep him out for 2-4 weeks. MacMahon mentions that Miller offers the Cowboys a better option in the passing game considering that Choice is a poor blocker and doesn’t contribute on special teams. Dallas has Felix Jones set as their No. 1 running back and newly drafted DeMarco Murray could end up being the teams No. 2 running back so Choice could be had for late-round draft. 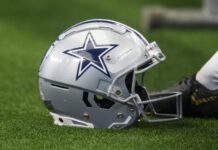