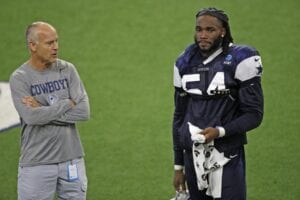 The Cowboys had major defensive issues in 2020 and it was clear that ownership expected changes on that side of the ball this offseason.

Cowboys HC Mike McCarthy was a big supporter of Nolan, but it wasn’t going to be enough to save his job in the ned.

Nolan, 61, began his NFL coaching career with the Broncos as their special teams/linebackers coach back in 1987.

Since then, Nolan has worked for several teams including the Giants, Redskins, Jets, Ravens 49ers, Dolphins, Falcons and the Chargers before the Saints hired him as their linebackers coach in 2017.

The Cowboys hired Nolan as their defensive coordinator last January.

Save his job in the end*

190,681FansLike
7,623FollowersFollow
275,136FollowersFollow
© NFLTradeRumors.co is an independent news source and has no affiliation with the National Football League (NFL), NFL.com, or any team(s).
wpDiscuz
You are going to send email to
Move Comment