The Dallas Cowboys officially placed DE DeMarcus Lawrence on the injured reserve due after sustaining a broken foot in practice on Wednesday. 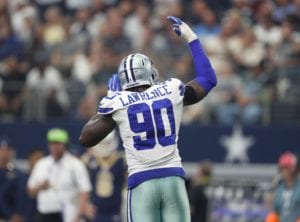 Lawrence broke the fifth metatarsal in his foot and requires surgery. However, if all goes well, Ian Rapoport reported that he should be back in November.

Dallas once again franchised Lawrence at the start of 2019 before agreeing on a five-year, $105 million deal last year. He was placed on the Physically Unable to Perform list in July but was activated last month and played in Week 1.

In 2021, Lawrence has appeared in one game for the Cowboys and recorded five tackles, no sacks and a forced fumble.