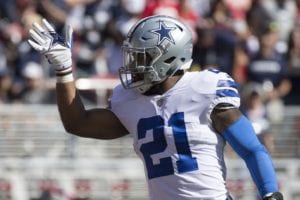 Dallas specifically converted $8.6 million of Elliott’s $9.6 million base salary to a signing bonus, which in turn created $6.88 million in cap space for the Cowboys.

Elliott was set to make a base salary of $3.85 million for the 2019 season and another $9.1 million in 2020 under the fifth-year option when he elected to hold out for a new deal in 2019. Dallas eventually re-signed him to a six-year, $90 million extension that included $50 million guaranteed.

In 2020, Elliott appeared in 15 games for the Cowboys and rushed for 979 yards on 244 carries (4 YPC) to go along with 52 receptions for 338 yards receiving and eight total touchdowns.