According to Tom Pelissero, Daniel Jones is considered week-to-week due to a strained neck, and backup QB Mike Glennon is now expected to start Week 13.

Tom Pelissero reports that Giants QB Daniel Jones suffered a strained neck in last week’s game and his status for Week 13 against the Dolphins is considered To Be Determined. 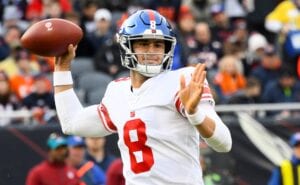 New York signed QB Jake Fromm off of the Bills’ practice squad on Tuesday, so it looks like they are preparing their options in case Jones is unavailable.

Ralph Vacchiano confirmed that Jones will at least miss practice time this week ahead of Sunday’s game.