According to Ian Rapoport, Giants QB Daniel Jones is expected to miss multiple weeks with his neck injury. 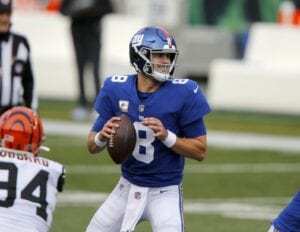 Rapoport adds Jones will have more tests done on Monday and will be considered week-to-week with what might be a ligament injury.

Mike Glennon is starting in Jones’ place in Week 13 and presumably would get the call for as long as Jones is out of action.