According to Aaron Wilson, the Dolphins designated DT Raekwon Davis to return from the injured reserve. 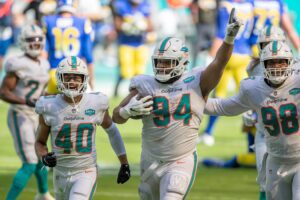 This opens a 21-day window for Davis to practice before being activated.

Davis, 24, was originally drafted by the Dolphins in the second round of the 2020 draft. Davis initially signed a four-year  $5.7 million rookie deal with Miami.

He suffered a knee injury in Week 1 against Pittsburgh and was placed on injured reserve shortly after.

In 2020, Davis played in 16 games, recorded 40 tackles with one tackle-for-loss, and one quarterback hit.