Per the NFL transaction wire, the Dolphins designated RB Patrick Laird to return from injured reserve. 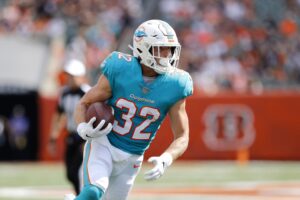 This opens up a 21-day window for him to practice with the team before he has to be added to the active roster. Given there’s just one game remaining, though, it’s possible Laird could play Sunday.

Laird, 26, wound up going undrafted out of California back in 2019. He later signed a rookie contract with the Dolphins and has been on and off of their practice squad ever since.

In 2021, Laird has appeared in six games and rushed for four yards on one carry to go along with three receptions for 17 yards receiving.