According to Barry Jackson, the Dolphins are placing first-round WR Jaylen Waddle on the COVID-19 list. 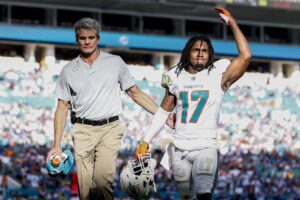 This puts Waddle’s status for Sunday’s game against the Jets in doubt.

Waddle, 23, was a part-time starter at Alabama. He was a first-team All-American as a sophomore before suffering an ankle injury that cost him a good portion of the 2020 season. The Dolphins drafted Waddle with the No. 6 overall pick in the 2021 NFL Draft.

In 2021, Waddle has appeared in 13 games for the Dolphins and caught 86 of 115 targets for 849 yards and four touchdowns. He’s also rushed twice for three yards and a touchdown.