According to Adam Schefter, Dolphins QB Tua Tagovailoa is expected to return to the starting lineup in Week 6 against the Jacksonville Jaguars in London. 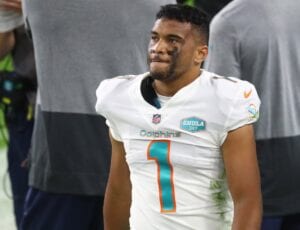 Tagovailoa is currently on injured reserve with fractured ribs. However, he’s expected to only miss the minimum of three weeks before he’s eligible to come back.

Schefter adds the team believes Tagovailoa’s ribs will be healed by that time. He suffered the initial injury on September 19 and Miami’s London game against the Jaguars is set for October 17.

In the meantime, Dolphins QB Jacoby Brissett, who started last week against the Raiders, will remain in the starting lineup against the Colts and Buccaneers.